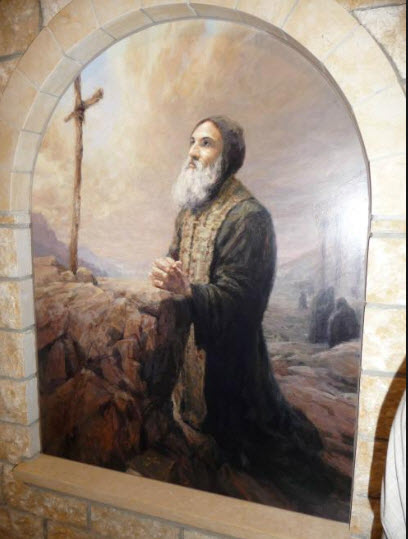 Saint Maroun was a priest and a hermit; he lived in the fourth century in the mountain area of Antioch, which was one of the five major sees of early Christianity. Even though he sought a solitary ascetic life, his light of holiness could not be hidden, but it shone in that region and attracted to him a lot of people. After his death, those who embraced Christianity through his preaching and his example, and later through his disciples, became known as “Beit” / the “House of Maroun” or Maronites; but they did not become a distinct Church until the year 685 AD when Saint John Maroun was elected as the first Patriarch of Antioch for the Maronites.

The identity of the Maronite Church is described by five distinguishing marks:

Spirituality, St. Maroun’s way was deeply monastic with emphasis on the spiritual and ascetic aspects of living, contrasted by the fact that the ‘Khoury,’ or, ‘priest’ of the Maronite rite can marry. For St. Maroun, all was connected to God and God was connected to all. He did not separate the physical and spiritual world and actually used the physical world to deepen his faith and spiritual experience with God.St. Maroun embraced the quiet solitude of the mountain life. He lived his life in open air exposed to the forces of nature such as sun, rain, hail and snow. His extraordinary desire to come to know God’s presence in all things allowed St. Maroun to transcend such forces and discover that intimate union with God. He was able to free himself from the physical world by his passion and fervor for prayer and enter into a mystical relationship of love with God.

Mission, St. Maroun was a mystic who started this new ascetic-spiritual method that attracted many people in Syria and Lebanon to become his disciples. Accompanying his deeply spiritual and ascetic life, he was a zealous missionary with a passion to spread the message of Christ by preaching it to all he met. He sought not only to cure the physical ailments that people suffered, but had a great quest for nurturing and healing the “lost souls” of both non-Christians and Christians of his time.

This missionary work came to fruition when in the mountains of Syria, St. Maroun was able to convert a temple into a Christian Church. This was to be the beginning of the conversion to Christianity in Syria which would then influence and spread to Lebanon. After his death in the year 410, his spirit and teachings lived on through his disciples and today he lies in “brad” village to the north of Aleppo.