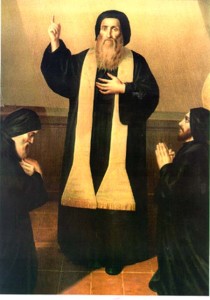 Maronites (Arabic: الموارنة‎, transliteration: Mawārinah, Syriac: ܡܪܘܢܝܐ, Latin: Ecclesia Maronitarum) are members of one of the Syriac Eastern Catholic Churches, with a heritage reaching back to Maron in the early 5th century. The first Maronite patriarch, John Maron, was elected in the late 7th century. Although reduced in numbers and estimated to have lost their status as a majority in Lebanon itself, today, Maronites remain one of the principal religious groups in the country and they continue to represent the absolute majority of Lebanese people when the Lebanese diaspora is included.

Before the conquest by Arabian Muslims reached Lebanon, which resulted in the Arabization of both those Lebanese who would become Muslim and the majority which would remain Christian, the Lebanese people, including Maronites, spoke a dialect of Aramaic Since at least the 15th century, however, the Lebanese people, be they Muslim, Christian, Jewish or other, have been Arabic-speaking. Syriac (Christian Aramaic) still remains the liturgical language of the Maronite Church.

It was in Antioch that the followers of Jesus Christ were first called Christians (Acts 11:26). Antioch, especially after the destruction of Jerusalem in 70, became a center for Christianity. According to Catholic tradition, the first Bishop was Saint Peter before his travels to Rome. The third Bishop was the Apostolic Father Ignatius of Antioch. Antioch became one of the five original Patriarchates (the Pentarchy) after Constantine recognized Christianity.

Maron, a contemporary and friend of St. John Chrysostom, was a monk in the fourth century who left Antioch for the Orontes River to lead an ascetic life, following the traditions of Anthony the Great of the Desert and Pachomius. He soon had many followers that adopted his monastic life. Following the death of Maron in 410, his disciples built a monastery in his memory and formed the nucleus of the Maronite Church.

The Maronites held fast to the beliefs of the Council of Chalcedon in 451. When 350 monks were slain by the Monophysites of Antioch, the Maronites sought refuge in the mountains of Lebanon. Correspondence concerning the event brought papal and orthodox recognition of the Maronites which was solidified by Pope Hormisdas on February 10, 518.

The martyrdom of the Patriarch of Antioch in 602 left the Maronites without a leader, a situation which continued because of the final and most devastating war between the Byzantine and Persian Empires of the early 7th century. The chaos and utter depression which followed led the Maronites to elect their first Maronite Patriarch, John Maroun, in 685. This however was seen as a usurpation by the Orthodox church. Thus, at a time when Islam was rising on the borders of the Byzantine Empire and a united front was necessary to keep out the Islamic infiltration, the Maronites were focused on a struggle to retain their independence against Roman imperial power. This situation was mirrored in other Christian communities in the Byzantine Empire and helped facilitate the Muslim conquest of the most of Eastern Christendom by the end of the century.

Now under Arabic rule after the Muslim conquest of Syria, the Maronites’ relationship with the Byzantine Empire improved. The imperial court, seeing its earlier mistake, saw an advantage in the current situation. Thus, Byzantine Emperor Constantine IV provided direct ecclesiastical, political and military support to the Maronites. The new alliance soon coordinated devastating raids on Muslim forces, providing a welcome relief to the besieged Christians throughout the East. Some of the Maronites relocated to Mount Lebanon at this time and formed several communities that became known as the Marada. That is from the view of Patriarch Doueihi, a renowned patriarch and historian. But this view being widely rejected by most historians today.

Another view is of Ibn al-Qilaii, a Maronite scholar from the 16th century who proposed that Maronites fled Muslim persecutions of the Umayyads, late 9th century. This theory is widely rejected.

The most widely accepted theory stipulates that the Maronites fled Jacobite monophysite persecution, because of Monothelite heresy as advanced by Sergius of Tyr a scholar of the 10th century. It is most probable because nearly all the sects became Monothelite after that Patriarch Sergius I of Constantinople introduced it. The Maronite migration to the mountains was over a long period. But a main migration must had occurred between the 7th and the 11th century CE.

Very little is known about Maronite history before the 11th century. Mainly because of the lack of references written at that time. So nothing can be conclusive except that they originally inhabited the Orontes Valley(today Syria).

Therefore, since 685 the Maronites have found themselves isolated from Christians of the Byzantine Empire and European powers. In turn, they have appointed their own Patriarch, starting with John Maron, who had been a bishop of Batroun, Mount Lebanon. Through him, the Maronites of today claim full apostolic succession through the See of Antioch. Nonetheless, a source of controversy surrounds the Maronites, as they have been accused of having fully adopted and embraced the Monothelite heresy.

Following the conquest of Eastern Christendom outside of Anatolia and Europe by the Muslims, and the establishment of secured lines of control between Islamic Caliphs and Byzantine Emperors, little was heard from the Maronites for 400 years. Secure in their mountain strongholds, It was not until the Crusader Raymond of Toulouse on his way to conquer Jerusalem in the Great Crusade that the Maronites were re-discovered in the mountains near Tripoli, Lebanon. Raymond later returned to besiege Tripoli after his conquest of Jerusalem and relations between the Maronites and European Christianity were established.

During the Crusades in the 12th century, Maronites assisted the Crusaders and affirmed their affiliation with the Holy See in Rome in 1182. Consequently, at least from this point onwards, the Maronites have upheld an unbroken ecclesiastical orthodoxy and unity with the Catholic Church. To commemorate their communion, in 1100 Maronite Patriarch Youseff Al Jirjisi received the crown and staff marking his patriarchal authority, from Pope Paschal II. In 1131 Maronite Patriarch Gregorious Al Halati received letters from Pope Innocent II in which the Papacy recognized the independence of the Patriarchate.

However, this Roman affiliation was to cost the Maronites dearly after Muslim rule returned following the ethnic cleansing of the Crusader States in 1291. The Mamelukes led a jihad which exterminated the last of the European Christians at Siege of Acre in 1291 and was continued in the anti-Eastern Christian pogroms in following decades.

However, connection to Rome was arduously maintained and through diplomatic threats and maneuvering, European Christian powers helped keep the Maronite community from destruction. Eventually, a Maronite College was established at Rome on July 5, 1584. From this college, the Maronite community obtained some valuable assistance in maintaining and buttressing their Christian identity. In 1610, the Maronite monks of the Monastery of Saint Anthony of Qozhaya imported one of the first printing presses in the Arabic-speaking world. The monasteries of Lebanon would later become key players in the Arabic Renaissance of the late 19th century as a result of developing Arabic, as well as Syriac, printable script.

Following the defeat of the Mamelukes by the Ottoman Empire, at first the Sultans left the Maronites to their own devices in their mountain strongholds. However, the chaos that resulted from the neglect of early Ottoman rule was exploited by rival Muslim warlords and their Druze allies leading to a constant state of turmoil which continued to limit the survivability of the Christian Maronites. Finally, following a rapid campaign, the Druze warlord Fahkr-al-Din II conquered and ruled the Greater Lebanon from 1585 to 1635 and implemented a more or less stable situation. However, unwilling to tolerate an Islamic heretic warlord in control of the area, the Ottomans led a military campaign and Fahkr-al-Din II was defeated by Ottoman forces and executed at Constantinople on April 13, 1635.

In 1638, France declared that it would protect the Catholics within the Ottoman Empire, including the Maronites, with the threat of war should Muslim

The head of the Maronite Church is the Maronite Patriarch of Antioch, who is elected by the bishops of the Maronite church and now resides in Bkerké, close to Jounieh, north of Beirut (the Maronite Patriarch resides in the northern town of Dimane during the summer months). The current Patriarch (since 1986) is Mar Nasrallah Cardinal Boutros Sfeir. When a new patriarch is elected and enthroned, he requests ecclesiastic communion from the Pope, thus maintaining their communion with the Catholic Church. As an Eastern patriarch, if he chooses to join the College of Cardinals; the patriarch is enrolled in the order of Cardinal Bishops, and does not receive a suburbicarian see, since he is a head of a sui iuris Church.

Maronites share the same doctrine as other Catholics, but they retain their own liturgy, theology, spirituality, discipline and hierarchy. Strictly speaking, the Maronite church belongs to the Antiochene Tradition and is a West Syro-Antiochene Rite. Syriac is the liturgical language, instead of Latin which is a tradition of the Roman Church. Nevertheless, they are considered, along with the Syro-Malabar Church, to be among the most latinised of the Eastern Catholic Churches.

Cardinal Sfeir’s personal commitment accelerated liturgical reforms in the 1980s and 1990s, bearing fruit in 1992 with the publication of a new Maronite Missal. This represents an attempt to return to the original form of the Antiochene Liturgy, removing the liturgical latinisation of past centuries. The Service of the Word has been described as far more enriched than in previous Missals, and it features six Anaphoras (Eucharistic Prayers).

Celibacy is not required for deacons and priests with parishes (though they may not re-marry after the death of a spouse); monks must remain celibate, as well as bishops who are normally selected from the monasteries. Due to a long-term understanding with their Latin counterparts in North America, Maronite priests in that area are expected to remain celibate. The bishops who serve as eparchs and archeparchs of the eparchies and archeparchies (the equivalent of diocese and archdiocese in the Roman Catholic Church) are answerable to the patriarch.